This Gender-Fluid Swimwear Line Is Breaking All the Rules

Unless you're totally living under a rock, you are probably well aware by now that gender, and all of its sociopolitical (and let's be real: socioeconomic, too) confines, is little more than a social construct. That's a simple enough idea to grasp, we hope. Now, take that a step further and consider how the construct of gender infiltrates every part of our existence, especially as it concerns our bodies.

If you're outside the male-female gender binary, and perform and express something true to you, of course, this is all too real. Awareness around this is shifting, but widespread considerations for non-binary people moving through society are slow to catch up. Gender-neutral bathrooms are one big step, as is the increase in accessibly priced unisex and andro fashion, but what if you just want to work on your tan at the beach? Western culture has long been the standard-bearer for promoting the "ideal" "beach body," with TV shows like Baywatch and even sects of gay culture promoting a limiting image of six-packs, bulging bikinis, and the tan-lines as something we should all apparently be striving for.

Non-binary designer MI Leggett, the brains behind queer label Official Rebrand, is here to help those who identify outside of those lines, with a new swimwear collection that will be sexy, chic, graceful, and suitable for anyone looking for a way to work on their tan without feeling oppressed. (So, honestly, that should be all of us).

Leggett launches their new collection, entitled "Queer the Beach" at The Phluid Project, a space that is advertised as the world's first gender-free shopping experience, and it's true. A recent visit to the space in downtown New York, which is spacious, airy, colorful, and beautifully curated confirms that Official Rebrand's latest collection — which is versatile and stylish enough to accommodate all body types for beach looks and beyond — will fit right into the store's inclusive environment. The models in the Queer the Beach campaign, shot by Jasper Soloff, include rising singer Merlot, Leggett, and several other gender-fluid artists.

Read on as Leggett talks with PAPER about the new collection, redefining notions of queer beauty, and what the swimwear and fashion industries at large can do to liberate the people wearing its clothes. 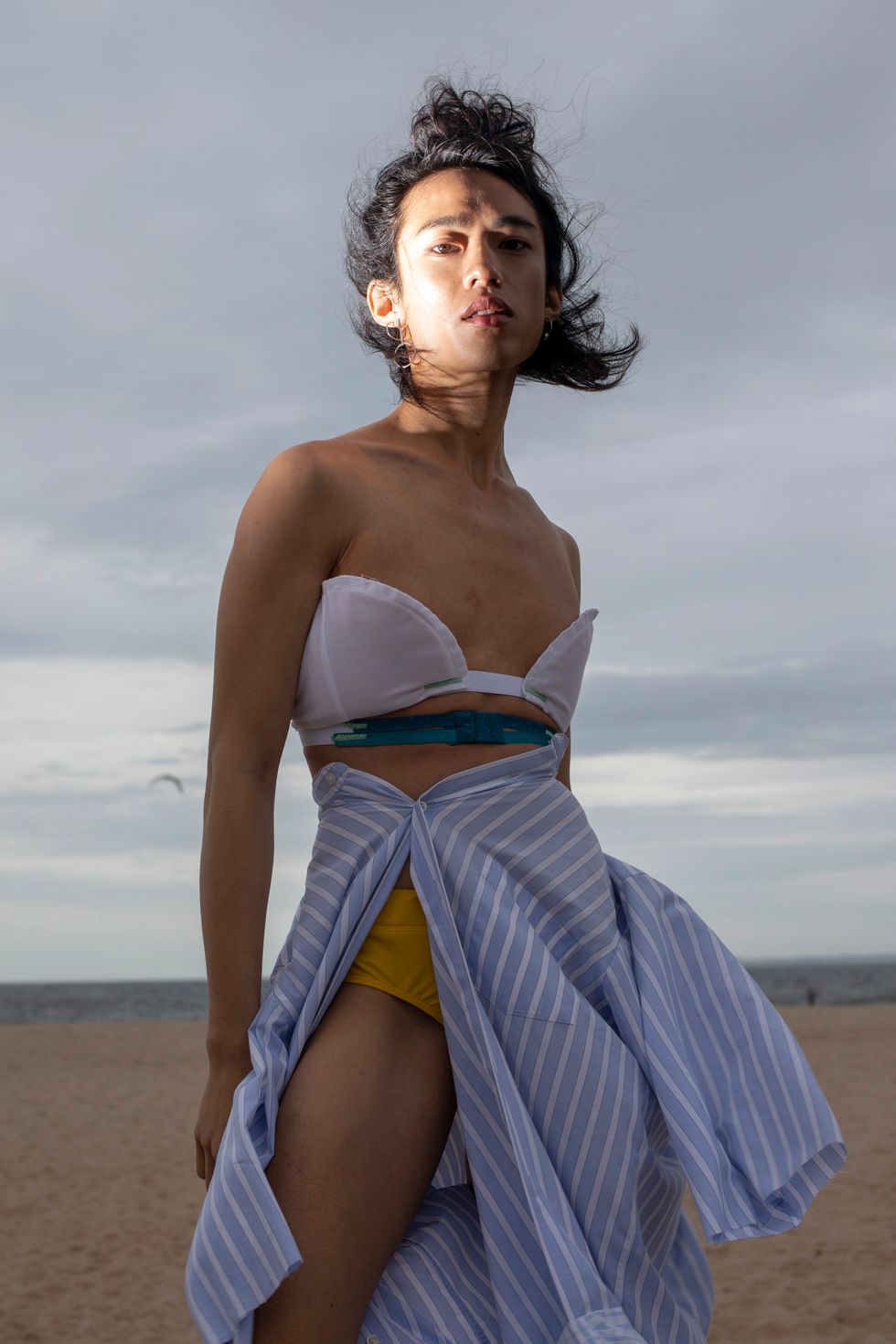 How did the collaboration with Phluid come about? It's quite seamless, it would appear.

Yes, it was quite serendipitous actually. Before they officially launched, my mom showed me an article about them in New York Magazine. I looked them up and realized they already followed me on Instagram. Once they opened last spring I'd come in regularly for their amazing programming and thought to myself it would be really cool to collaborate in the future.

Their buyer, Preston Souza, had discovered OR a while ago when he was responsible for the emerging/forward thinking designer category for Liberty Fairs, which is why Phluid followed me before the store opened. Turns out they had been hoping to collaborate with me as well and reached out when the time was right.

What's going to be happening at the launch event?

The opening celebration is Friday 6-8 pm; Saturday and Sunday, I'll do custom rebranding from 2-6 pm. This means customers can bring in something from home and I'll paint or draw on it with an image of their choosing from the collection. Phluid and I will also provide supplies and support to help visitors make their own pieces. I can't envision everyone's perfect garment for them and I love helping people create in a way that expresses their unique selves. 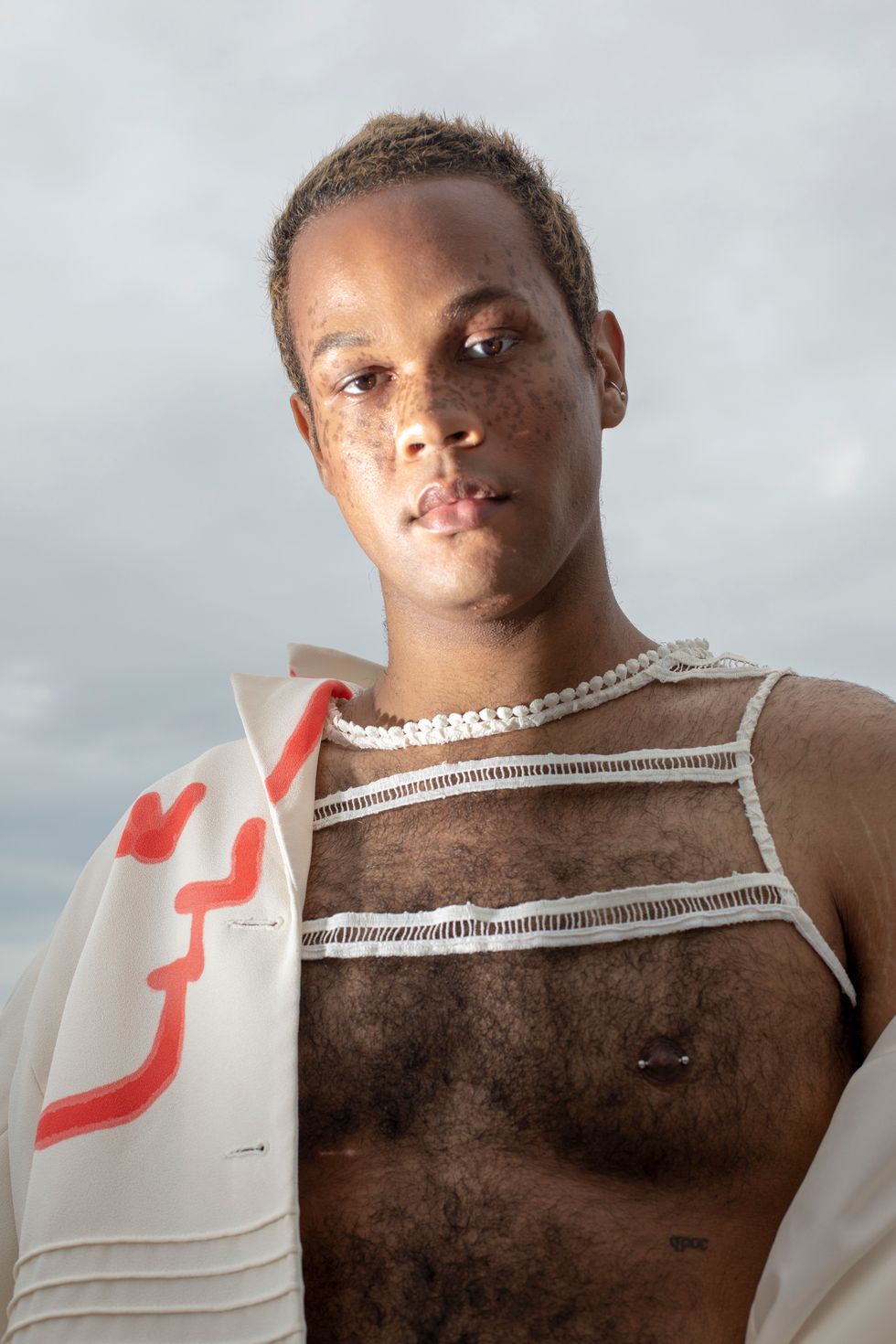 Tell me about the role sustainability plays into your work as a queer designer. Is there a link for you between sustainability and the queer experience?

For four formative years in high school I worked at The Food Project, a sustainable agriculture non-profit. This instilled in me a passion for utilizing vital resources that are so often discarded. I actually enjoyed flipping steaming compost piles in 90 degree weather because I was so excited to help keep "waste" within the nutrient cycle. I also met many lifelong friends and mentors there, most of whom eventually came out as queer/trans. Thus, I definitely correlate environmental consciousness with queer safe spaces where people take care of one another and challenge norms. In America, the expectation for feeding yourself is to go to the grocery store or a restaurant, get whatever you want regardless of whether or not it's in season, and not give a second thought to where your food might have come from. At The Food Project, we followed what we ate from seed to fork. In addition to this, tasks on the farm were never divided based on gender, and had lots of workshops and discussion in which we were asked to define our identities. These workshops were the first places I saw people proudly identifying as queer and the seeds were sown for me to eventually realized you didn't have to be a boy or a girl.

The Food Project showed me how these systems that are so ingrained in our society are constructed mainly for the sake of simplicity and convenience, and that how things work outside of these socially constructed systems, while complex, are infinitely more fulfilling.

Furthermore, as a gender-fluid visual artist the elemental correlation of water to my identity feels inherently queer and natural. I can freeze, melt, simmer, or splash. I can be a twink, a dyke, or a flapper.

What about in terms of basic needs? We can't be any of those things if we've killed the environment.

Let's face it, we can't celebrate queerness without water. And the amount of water the fashion industry consumes is staggering. It takes 700 gallons to make a single T-shirt. I explore this specific environmental concern with my Water T's project, a selection of the first 50 editions will be available this weekend at Phluid. To bring this statistic to life, I am reclaiming 700 T-shirts, each with a drawing representing one gallon of water screen printed on it and the corresponding gallon number hand painted below. Through this rebranding I remove the shirts' gender and generate awareness. It'll also conserve 490,000 gallons of water by the time the project is over. I'm also doing the same with jeans, each new pair of which takes about 1,800 gallons of water to make -- which is about the equivalent of a 12-hour shower or 600 toilet flushes. 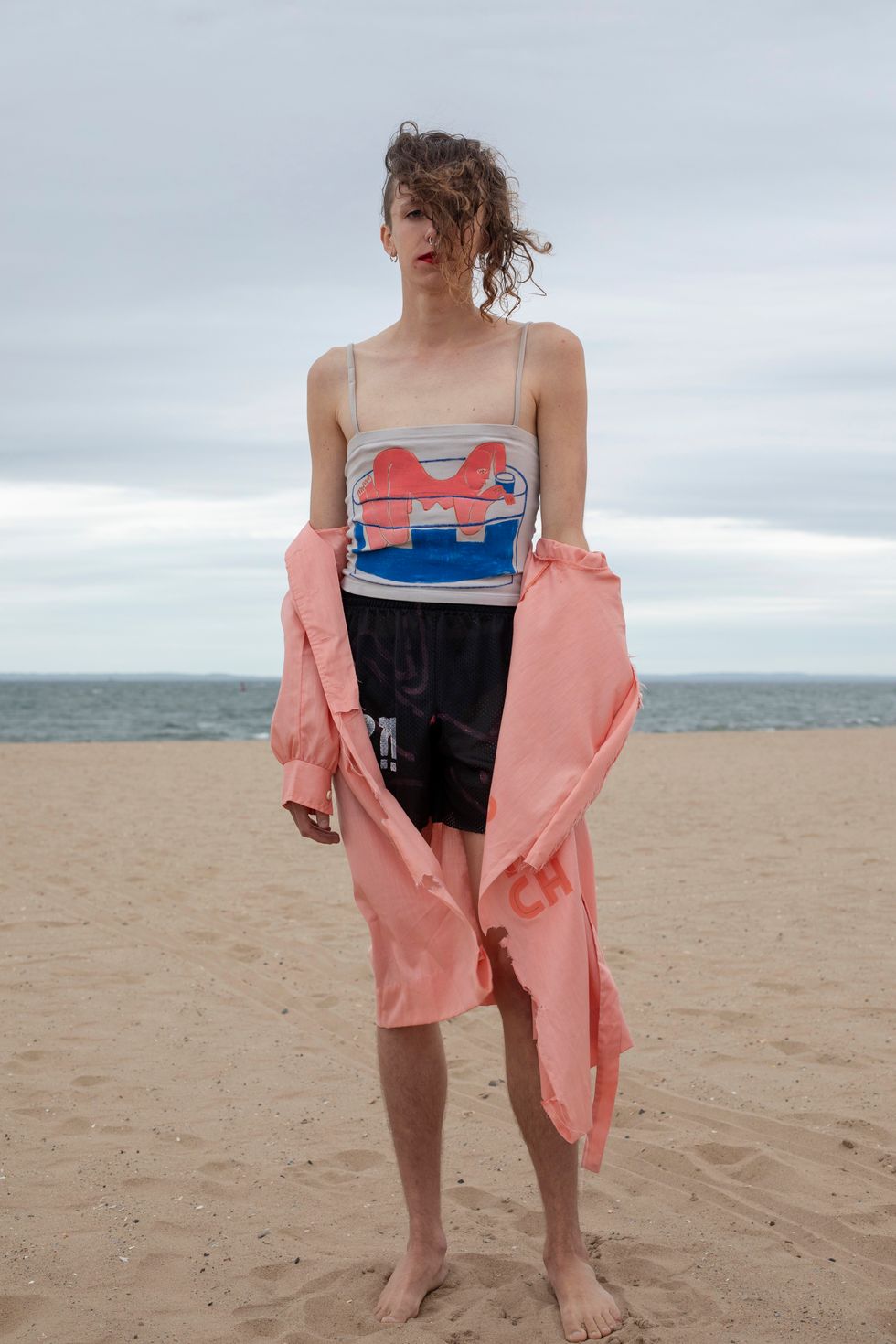 The concept of gender-free clothing is quite liberating, especially in the swimwear category, which can lend itself to an over-reliance on body self-image and confidence. What do you think the swimwear industry can learn from intentionally creating collections that feel less restrictive?

To liberate clothing from gendered confines, we need to completely reimagine the possibilities of clothing. People need to have agency and not have their options dictated by unfair expectations on the basis of their assigned gender, something they did not choose.

Thus, I designed these swim tops to be adjustable, wearable in multiple ways to suit many different types of bodies and preferences. I want to empower people to embrace their creativity define their style on their own.

This new concept collection is a departure from what one expects to see at the beach or pool, but functional nonetheless. By making designs that look totally different from the norm, the pieces carve out a new space for non-binary style that do away with the typical swimwear shapes and their gendered connotations beachgoers are used to.

How did you go about making the collection?

Most of the materials are synthetics, designed to dry fast, but not necessarily cling tightly to the body like typical swimwear. They are intended to be worn for leisurely swimming, but are versatile enough to also be worn on the street or to a party. The overall aesthetic blurs lines between beachwear and regular clothing with the goal of questioning boundaries and definitions just like OR challenges the boundaries between menswear and womenswear.

Similarly, I also appropriate and isolate parts that swimwear and underwear have in common, such as hooks, pads, and lace) drawing attention to the arbitrary lines dividing these two classes of clothing. Underwear and swimwear are remarkably similar but separated by social definitions, connotations and expectations--which OR intends to break apart. 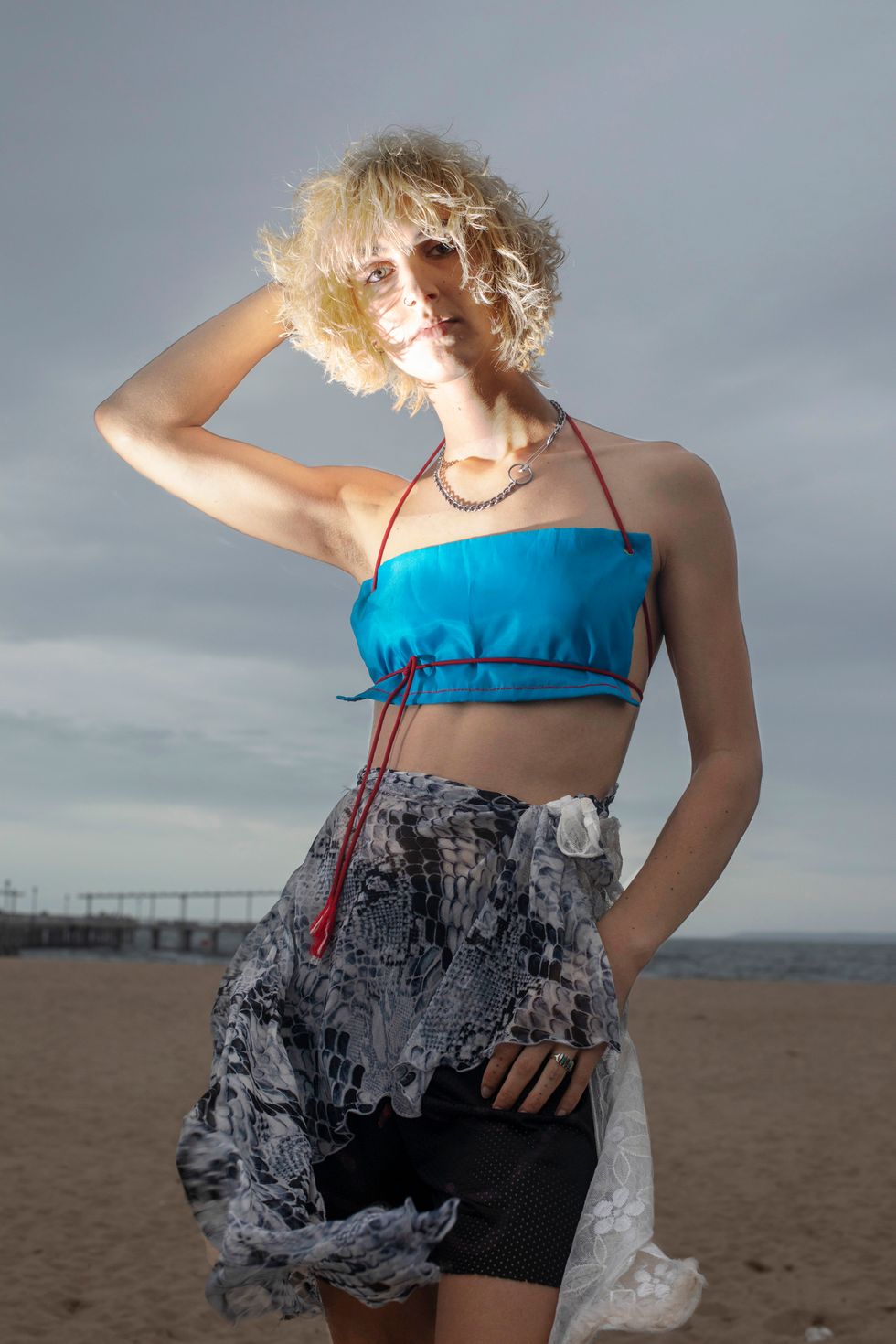 There are murmurings online about how queer bodies are seen as beautiful/attractive, and how that's measured and who is measuring attractiveness. That said, in creating this new line, do notions of attractiveness come up for you? What's your ultimate goal for people who will wear this collection to the beach and beyond?

Although I believe there is nothing gendered about genitals nor nipples, I didn't make pieces that cling tightly to these parts, because that kind of beachwear already exists. I wanted to make garments that are freeing both physically and mentally. One way I went about this was by making pieces that are adjustable and can be worn in many different ways to fit many different kinds of bodies. For example, a folded bandana with an adjustable strap, can be a beach top for all different kinds of chests, or even be styled as a loincloth!

I like to give my customers agency to figure out how to wear something in their own way. To decide for themselves what is attractive. We all deserve the right to define our own realness and not fall prey anyone else's expectations.

How do you think the individual ability to define what's real plays out in social or online media spheres?

Although heteronormativity undoubtedly shapes queer beauty standards, social media is creating a more public space for alternative presentations all along the gender expression spectrum to be shared and affirmed. Of course, in such expression, whether online or off, there is inherent risk. Huge corporations may paint themselves rainbow for a few days a year, but that doesn't mean queers aren't still getting harassed, attacked and killed every day.

Visibility won't eradicate hate, but there is no doubt it will help move us in the right direction, teaching younger generations from earlier ages that it's ok to define yourself and not let others do it for you. I feel tremendously blessed to live in a time where media is not just created by heteronormative moguls but also by people who reject the standards that are continually shoved down our throats through advertisements and so many other forms of media. I want this collection, and Official Rebrand in general, to help bolster alternative forms of expression and reject mainstream ones.